Germany’s modern pentathlon coach Kim Raisner was disqualified after hitting a horse and will not be a part of Saturday’s men’s individual competition at the Tokyo Olympics.

“The UIPM Executive Board (EB) has given a black card to the Germany team coach Kim Raisner, disqualifying her from the remainder of the Tokyo 2020 Olympic Games,” the Modern Pentathlon federation (UIPM) said in a statement. “The EB reviewed video footage that showed Ms. Raisner appearing to strike the horse Saint Boy, ridden by Annika Schleu (GER), with her fist during the Riding discipline of the Women’s Modern Pentathlon competition.”

Modern pentathletes compete in five different sports for a medal, but do not use their own horses for show jumping discipline. The riders are given 20 minutes to warm up with a horse, which is drawn at random. 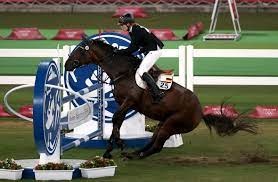 Schleu was leading the field with a 24 second edge going into the show jumping round. However, Saint Boy started misbehaving, bucking and eventually refused to do any jumps. Raisner ordered the rider to “really hit it, hit,” Saint Boy, which could be heard live back in Germany, and even punched the horse once above the back of the leg, Reuters reported.

Sign up for our free daily Olympics newsletter: Very Olympic Today. You’ll catch up on the top stories, smaller events, things you may have missed while you were sleeping and links to the best writing from SI’s reporters on the ground in Tokyo.